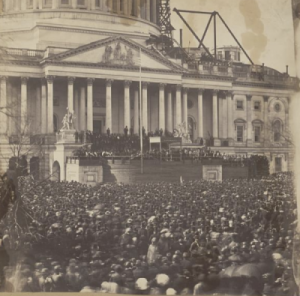 “The avenue in front of the portico was thronged with people, the crowd extending to a great distance on either side and reaching far into the Capitol grounds, and every available spot was black with human beings, boys and men clinging to the rails, mounting on fences, and climbing trees until they bent beneath their weight.” so recorded the New York Tribune on May 4, 1861.

Adrienne M. Lundgren, senior photograph conservator in the Conservation Division of the Library of Congress notes, it was a pivotal moment in the nation’s history.  The country is on the brink of a civil war.  Would the new president preserve the nation or was he an enemy of the South? Threats of assassination loomed.

Today, hundreds of photographs of presidential inaugurations and every important event are taken.  But in 1861, the photo taken of that moment has become an icon of U.S. history. In this illuminating blog post Lundgren tells that story. She sets the record straight. For the entire article Click.