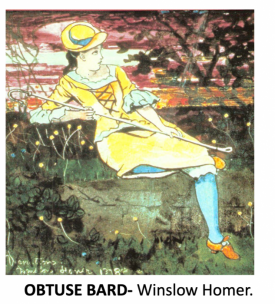 The Tile Club was one of many societies that formed across the United States during the late nineteenth century.

The club was founded in 1877 riding the wave of interest in the decorative arts. Members met once a week and would each contribute to the “decorative age” by painting an eight-by-eight-inch ceramic tile. These meetings became a time to socialize, dine, and enjoy the music performed by guests and honorary members.

Dr. Stuart Embury is a retired family physician from Holdrege, Nebraska. He was involved in medicine for more than fifty years.  He became interested in art when starting his practice in 1970, when he began collecting original prints and American art books. This evolved into a 12,500 volume library of all aspects of American art.

A few years later his interest turned to painting, watercolor, and sculpture. He became friends with Luigi Lucioni, an Italian-American artist, and published three books about him. (paintings, prints, and his relationship with singer Ethel Waters). During the last several decades he has focused on autographs, letters, documents, and manuscripts on American artists.

The collection stands at 1,500 pieces with a Gilbert Stuart letter being the rarest. He intends to donate the collection to the Archives of American Art.

Dr. Embury is a long-time member and supporter of the Manuscript Society.