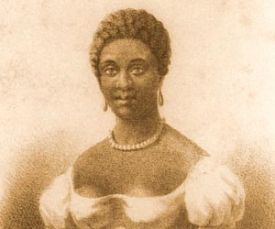 “…. in every breast, God has implanted a principle, which we call love of freedom; it is impatient of oppression.” So, states Phillis Wheatly in her first publication after her emancipation from slavery in 1774. This rebuke of slavery and defense of human equality, printed from a letter written to Presbyterian Minister and Mohegan Indian Samson Occom, is now in the collection of the Museum of the American Revolution.

Phillis Wheatley was born in West Africa. As a child she arrived in North America on a slave ship known as The Phillis. This ship would give her her new name.  She was enslaved and educated in the household of Boston merchant John Wheatley. As a young woman she began writing beautiful and complex poetry. Her topics included religion, nature, politics, race, slavery, art, and literature. Her Poems on Various Subjects, Religious and Moral was lauded in both Europe and the American colonies.  After her emancipation in 1774, she faced continued racial discrimination and died in poverty in 1784 at the age of 31.

For more information on this letter and the collection at the Museum of the American Revolution.