The Trustees of the Chatsworth Settlement are donating The Book of Lismore to University College Cork. Created in the late 15th century, this major medieval manuscript is from the golden age of Irish literature.  It is one of the Great Books of Ireland. 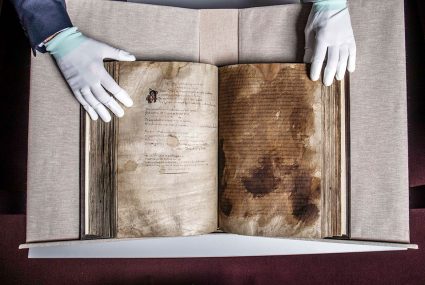 The Book of Lismore @artdaily

The Book of Lismore highlights an important part of the cultural heritage of Cork, Munster and Ireland. Like other surviving manuscripts in Irish, it illustrates the multi-layered histories and traditions of the past. The manuscript is also significant for its place in the Irish manuscript and scribal traditions. Plus, this unique book illustrates how an object can be subject to the cultural, social, and political interactions between neighboring countries.  In this case, Ireland and Great Britain.

Compiled for Fínghin Mac Carthaigh, Lord of Carbery (1478–1505) it became known as Leabhar Mhic Cárthaigh Riabhaigh. It begins with religious-themed material. It mainly tells the lives of the Irish saints and apocryphal tales associated with them. Next, it moves to material in translation. Included are the “History of the Lombards” and the “Conquests of Charlemagne.” It also contains the only surviving translation in Irish of the travels of Marco Polo. A collection of native, secular texts follow dealing with the theme of Kingship. Finally, the Book concludes with the exploits of the popular mythological hero Fionn mac Cumhaill and the Fianna, as told in the lengthy tale known as Agallamh na Seanórach.

Ireland’s leading centre for the study of Gaelic Ireland

For the fascinating entire article, images and more. Our thanks to society member Paul Albright for sharing this article with us.