Lincoln Letters – You Can Read Them

Home/News/Lincoln Letters – You Can Read Them

Lincoln Letters – You Can Read Them

Last month, the Library of Congress completed a two-year, crowdsourced project to transcribe 10,000 documents in its vast collection of Abraham Lincoln’s papers and make them legible. Now anyone can read the scribbling of correspondents. Each wrote with a variety of spelling, grammar and punctuation skills. The Lincoln Letters are in many languages.  The majority of items in the library’s Lincoln collection are in English, but some are in German, French or Italian. One item, thought to be in Arabic, turned out to be in neo-Aramaic, the library said. (Experts are still not sure what it says.)

In 1861, a band of anti-slavery militants — “the Army of Freedom in Kansas” — wrote, offering to bring volunteers to Washington and guard Lincoln’s inauguration. 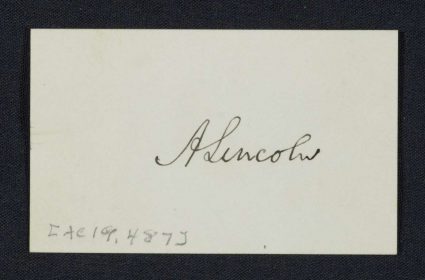 © Library of Congress An autograph that Lincoln sent via his secretary John Hay to an admirer who had requested it.

On March 31, 1864, Cornelia MacKay, of Stanwich, Conn., describing herself as the “daughter of a staunch Republican,” wrote to Lincoln requesting the autograph of “our beloved president.” On April 18, she received a note from the president’s trusted aide, John Hay, enclosing the autograph, “A. Lincoln.”

A 65-year-old New York man addressed the president as “Father Abraham” and offered to serve in the Army without pay. A friend would serve, too. “We have Faith in God and dry Powder,” the writer said.

Many more letters are part of this project. Read for yourself!

For the complete article