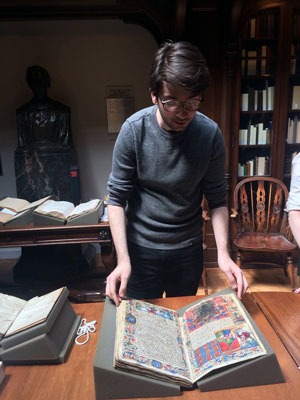 For most of us, early medieval books equal illuminated manuscripts. So, we think of the Latin religious texts. Those beautiful prayer books with ornate gold initials and scroll work. Other books did not get these illustrations until the late 13th century. How and why that changed is the focus of this year’s Maass Research Grant recipient’s research. Christopher T. Richards is a doctoral candidate in art history at New York University’s Institute of Fine Arts. He is taking a fresh look at Ovid’s Metamorphoses. Richards’ dissertation is titled, “Picturing Desire and Desiring Pictures: The Ovidian Manuscript Tradition.”

Metamorphoses is a poem in 15 books. Ovid, a Roman poet, composed the piece in Latin in about 8 CE.  The work is a collection of mythological and legendary stories.  Many are taken from Greek sources. Passion is a essential theme of the poem. The stories, which are unrelated, are told in chronological order. So, it begins with the creation of the world. The first metamorphosis is from chaos to order.  It ends with the death and deification of Julius Caesar. From human to god.

Between 1320 and 1400, artists created 12 miniature manuscripts of Ovid’s narrative poem for the French court. Six more followed by 1500. In that time, Richards argues the manuscripts themselves underwent a metamorphosis. Rather than merely texts of poems, they turned into lavishly illustrated works with a visual language all their own. The illustrations were not just pictures for pictures’ sake. In fact, they are an argument for illumination.

Literary scholars know these works well. But art historians have glossed over them. Richards aims to fix that. So far, he has examined manuscripts of the Ovide in the United States, at the Vatican, and in Paris. He plans to use the Maass Grant funds to examine more copies of the work. Richards will travel to Copenhagen, Brussels, Cambrai, Rouen, London, Lyon, Geneva, and Bern. In each city he will collect information on each edition. How was each produced, constructed, and bound. What are the techniques used. What is the style of the illuminations. In addition,  his findings may offer insight into manuscript workshops, patronage, and readership.  Finally, he will learn about the artists themselves.

Richards hopes his work may help art historians better understand how the iconography of the manuscripts evolved and influenced other vernacular texts. Finally, Richards plans to show that the love for images in Ovidian miniatures, which are books about love and desire, spurred the French court’s desire for illuminated books. “By assembling the first art historical [study] of Ovide,” he wrote in his grant proposal, “my dissertation offers a reevaluation of the history of the book, while excavating an unrecognized late-medieval discourse on art and love.” What’s not to love about that?

Richards is the first Maass scholar from New York University. He was chosen from a field of 18 by Scholarship Committee members Ellen Myers (chair), Dick Cameron, Ellen Clark, and Elizabeth Dow. The entries came from both public and private universities. They include the University of Michigan; the University of Virginia; William & Mary; Brown; Cornell; Florida State; Notre Dame; Rice; and Southern Methodist University. The grant is named in memory of Richard Maass, a philanthropist and prominent collector of American historical manuscripts. He was a founder and early president of the Manuscript Society.

Funding for the Maass Grant comes from the generosity of Manuscript Society members. To learn more about past recipients and opportunities to support future scholars visit https://manuscript.org/projects/scholarship-activities.