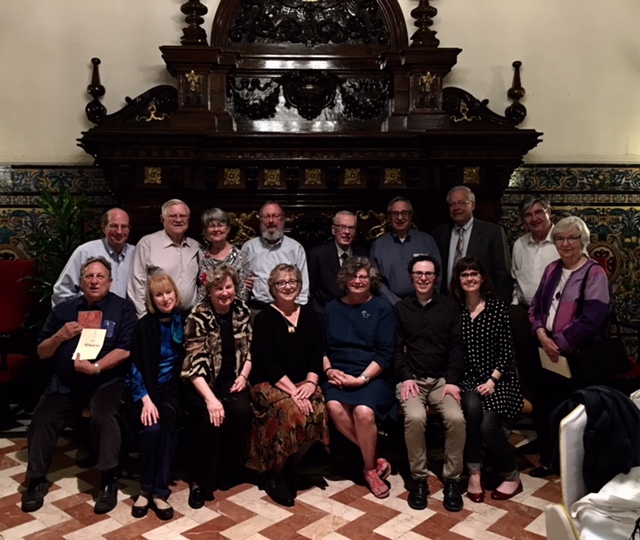 The Manuscript Society’s expedition to Spain commenced on Sunday, October 23, 2016 at the Palace Hotel in Madrid.  The sixteen participants, including Alfred Lemmon, the Board of Trustees member who had planned the week’s tour, gathered for a reception where Alfred introduced us to Archives Specialists Lupe Fernandez Morente and Esther Gonzalez Perez and the local Trip Assistant Valme Parias Hernandez de Heredia. The trays of hors d’oeuvres and paella and chocolate tarts just kept coming, a portent of the good food we would enjoy. 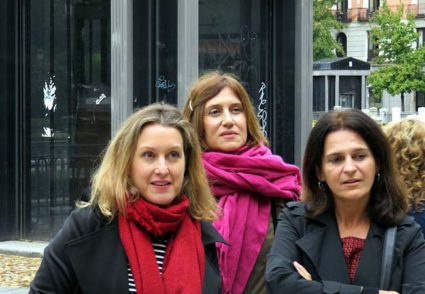 On Monday morning we gathered in a hotel conference room where Lupe described her family’s involvement with a foundation which has built reconstructions of a nao and a galleon, small ships important in the sixteenth century and which today sail worldwide on good-will trips. Two palaces were on Monday’s agenda.  The first was the Royal Palace, where we visited the Reading Room of the Library with its large crystal chandeliers and glass-enclosed bookcases. The librarians had brought out seven documents; the detailed Book of Maps of 1580 was a favorite. We toured the public rooms of the palace and then walked to the Café of the Oriente for lunch.

The group spent the afternoon at the home of the Duke of Alba, Liria Palace, which had been burned by General Franco’s forces in 1936. One half of the books had been destroyed, but there were still 22,000, arranged by size on the bright green shelves of the room. We were fascinated by Columbus’ list of sailors who had accompanied him on his first voyage and by the marriage contract of Juana la Loca, daughter of Ferdinand and Isabel, and Philip the Handsome in1496. As we toured  reception rooms upstairs, Salvador, the guide, kept reminding us that according to royal protocol, the Duchess of Alba, with her many titles, had outranked Queen Elizabeth II of the United Kingdom when they attended the same event.

On Tuesday we walked the short distance to the Naval Museum, and put our bags and jackets through the security equipment—standard procedure in almost all the libraries with the exception of the Liria Palace, which is still a private home. We admired a series of maps at the Naval Museum, especially the six feet long world map made by Juan de la Cosa dated 1500 and showing the Americas. The Admiral in charge of the museum made an appearance and we said our farewells.

We walked to the Academy of Fine Arts of San Fernando where the Spanish painter Goya joined the faculty in 1780, according to documents which we viewed in their archive. We later toured the gallery and were intrigued by a painting of the Family Tree of Manuel Godoy, the court favorite during the reign of Carlos IV.  The genealogy was a complete fabrication, according to Mercedes Amazua, Alfred Lemmon’s good friend and recently retired archivist. 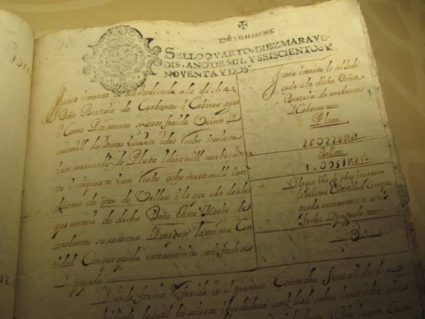 Lunch was next door from 2:00 to 4:00 in the Casino de Madrid, a private club with a strict dress code and a well-known chef. No siesta for this group. We were off to a visit to the Monasterio de Descalzas Reales, a still active convent founded in the 1500s. It contained tapestries, frescoes, and a chapel with 300 religious relics, along with a secret door for outside visitors. We had to depart so the nuns could meet for evening prayers.  Half of us crossed the street to the Libreria Bardon, an antiquarian bookstore where Alicia Bardon, grand-daughter of the founder, showed us some of her treasures. She also gave each of us a catalog of 150 important editions of the works of Miguel de Cervantes, printed in 2016 to commemorate the 400th anniversary of his death.  While some of us browsed, the rest walked back to the Hotel.

Throughout the week the Palace Hotel had been abuzz with Spanish political activities. It is located across the street from the Spanish Parliament building and meetings were taking place, both there and in the hotel, to end 300 days plus of no formally-elected government. The Populist Party finally garnered enough seats to declare Rajoy the prime minister.  Security was so tight on Wednesday that members of our group had to show room keys in order to get through the barricaded street and re-enter the Palace Hotel.

On Wednesday, October 26, we drove to the Escorial, the royal palace outside of Madrid begun by Philip II in the sixteenth century. We admired the volumes in the vast library—spines toward the wall with gold-leafed pages visible. Then the Director took us to a room where he displayed treasures such as a red velvet folder with a gold seal which contained authentication for the king’s 7,000 religious relics. We also admired a book dated 1248 on ways to play chess, a game learned from the Arabs. We gathered around a parchment made by monks in 1046, only to learn that it was a facsimile made in Spain ten years ago. Facsimile? with a raised eyebrow, brought smiles to  the group on several occasions.

Before leaving the Escorial we stopped briefly in the Cathedral and then descended the numerous steps to the Crypt where Hapsburg and Bourbon royals have been buried since the sixteenth century. On the way out we stepped into a small Bosch exhibit and then climbed on the bus for a drive to La Granja, the royals’ country place near Segovia.  After a very leisurely lunch at the local Parador, we walked up to the palace, arriving at 5:00, closing time. But we enjoyed the gardens and the beautiful afternoon before returning to Madrid.

Thursday was our last day for the extravagant breakfast buffet under the glass dome at the Palace Hotel. Then we boarded our bus to Toledo to tour the Tavera Hospital, not a medical facility but a section of the National History Archives devoted to the manuscript collections of Spanish nobles.  The building was owned by the Duke of Medinaceli until 1989 when he donated it to the government. We deposited our purses and backpacks in an office before entering what was certainly one of the trip highlights. First was a room of display cases and old trunks; one document contained a selection of codes for each letter of the alphabet.  Next we went to a cataloging room lined with boxes, 698 for the family of the Marques of Santa Cruz.  On the long tables were red leather boxes and stacks of papers tied in red ribbons pertaining to the Duke of San Carlos. One box, with a key, was correspondence pertaining to Jews in Spanish America in the 1700s.

Then we went upstairs to a file room of documents which had already been catalogued. Our guide pulled out Drawer 36 and showed us a 10th century Visigothic manuscript, once owned by the Duke of Osuna.  How does one repair and conserve these fragile pieces, we asked? So it was down to the first floor restoration room where Maria showed us the technique of supplementing a torn sheet with fabricated paper. And it was on to the next lab where she dissolved the appropriate paper fibers into a pulp soup which adhered to the torn areas. Our experience at the Tavera Hospital in Toledo gave us an increased appreciation for paper restoration and an awareness of private collections which will now be available for research.

Our lunch at the Hacienda El Cardenal was a special treat before our bus took us back to Madrid. We went straight to the Atocha train station where we sat in the VIP lounge until our train departed for Seville. Three hours later we arrived and found our luggage waiting for us in our rooms at the Hotel Alfonso XIII. 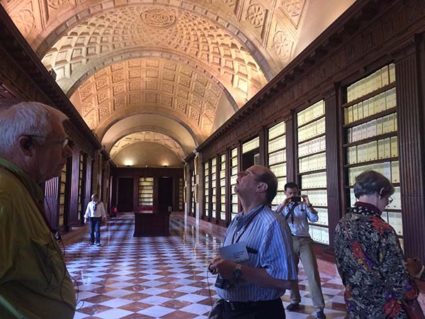 Our time in Seville began on Thursday morning with a horse-drawn carriage ride around the city followed by a visit to the Holy Grail of colonial Spanish American research, the Archive of the Indies. We walked the halls lined with mahogany bookcases filled with archival boxes – all empty, we learned, because the documents of five hundred years are stored in vaults. Then we went to a third floor office where the archivist had gathered a large folder of documents and maps. A number of them pertained to Louisiana; she had corresponded with Alfred Lemmon in New Orleans and assumed that the sixteen of us were from that area. One was an 1803 document authorizing Napoleon to transfer the Louisiana Territory from Spain (which had owned it since 1763) to France, so that Napoleon could then transfer it to the United States.

Next we walked to the Columbina Library, the collection of Christopher Columbus’ son, Hernando, also spelled Fernando. No questions about Christopher, insisted Pepe, our guide, only queries about Hernando, who collected 15,300 books. Many have been lost to mold, the Inquisition, war, and the rains of 1986 which caused the library’s ceiling to collapse. Pepe described with great enthusiasm the books in the first display case, and then informed us that they were all facsimiles. Then he took us to another case where he had gathered treasures, including the oldest book in the collection, from the ninth century.

After lunch at the typical Restaurant Robles Placentines, we walked to the Cathedral and paid our respects at the elaborate tomb of Christopher Columbus, aware that cathedrals at Santo Domingo and at Havana also claim some of his remains. Our afternoon concluded with a tour of the Alcazar with its tiles and patios. A movie company was filming in the back area and we enjoyed watching “Roman soldiers” stride through the gardens. 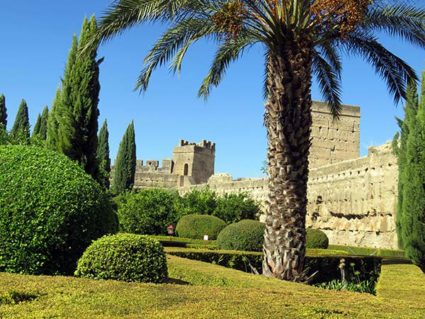 Our final day was an escape to the countryside as we traveled to the village of Palma del Rio in the province of Cordoba. We were welcomed to the Portocarrero Palace by Cristina Ybarra who, along with her husband, is reconstructing the home and gardens within the Moorish walls. After the palace tour, we had lunch on the terrace.  There was Tortilla Espanola, the potato and egg omelette served cold as an hors d’oeuvre with a cherry juice and wine punch, followed by Paella Valenciana filled with seafood. Finally, we pulled ourselves up the stairs, walked down a hall lined with vintage uniforms and clothed mannequins to Cristina’s art studio, where we absorbed the influences of new and old. We departed with copies of her art catalog and a sampler of exotic olive oils.

Our week’s adventure came to an end back at the Alfonso XIII Hotel. We walked through the lobby with its jewelry store displays featuring citrus—silver bracelets wrapped around oranges and turquoise brooches pinned on oranges of Seville. We passed through the large courtyard filled with tables to a special dining area covered in blue and yellow tiles. The weather on October 29 was still too warm to light the fire. The fish and the wine accompanying dinner were excellent. Alfred Lemmon, the member of the Board of Trustees who had planned our tour, toasted the group and presented us with favors—a CD entitled “New Orleans and the Spanish World,” a fitting take-home gift as we look forward to the Manuscript Society’s annual meeting in 2018  in that city.