Travelers will board independent flights to Rome Fiumicino Airport (FCO) from the United States. 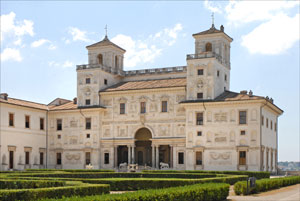 Upon arrival at the Rome Fiumicino Airport (FCO), take private car transfers to the Rose Garden Palace Hotel to check in. In the evening a  private visit to the French Academy in Rome. It is housed in the breathtaking surroundings of the Villa Medici complex. Enjoy a private tour of the gardens and grounds before an elegant reception in the Salon de Lecture. Return to the hotel for an independent dinner. 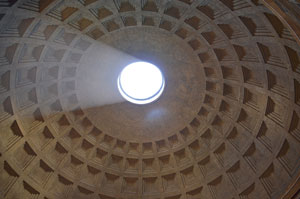 Begin the day with a walking tour of Piazza Navona, the most outstanding square of the Baroque period in Rome, which features Bernini’s Fountain of the Rivers and faces St. Agnese in Agone, a church designed by Francesco Borromini. Continue to the Pantheon, the world’s most important and well-preserved Roman temple. Visit the Church of St. Ignatius, one of the most impressive late Baroque churches in Italy and end the walking tour with the iconic Trevi Fountain, designed by Italian architect Nicola Salvi and completed by Giuseppe Pannini. Visit the beautiful Biblioteca Angelica, a public library that formerly belonged to the Augustinians and containsabout 180,000 volumes of manuscripts and 1,100 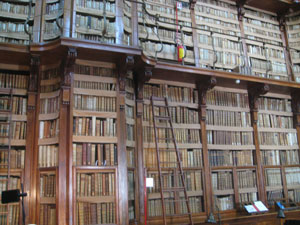 incunabula. See some of the most important Latin and Greek manuscripts in the collection. Pause for lunch  at a nearby restaurant specializing in traditional Roman cuisine. Following lunch, visit the Biblioteca Casanatense, which began with the collection of Cardinal Girolomo Casanate, a collection of 20,000 volumes left to the Dominicans. Take a tour of the library ending with the exhibition of a few rare, ancient volumes taken from the Library archives, illustrated by a curator of the collections. Return to the hotel for an independent evening.

The day begins with a private early opening of the Vatican Museums where we will be among a limited group of visitors allowed into the cultural treasure trove of the papacy. Highlights of this tour include visits to the Raphael Rooms—the Pope’s library, lavishly decorated with Raphael’s master frescoes—and the Sistine Chapel. Once the museum opens to the public, we continue touring other masterworks, from Raphael’s Transfiguration to highlights of the world’s most important collection of ancient sculpture, including the Laocoön and the Belvedere Torso. We will see Melozzo da Forlì’s famous fresco of Sixtus IV appoints Bartolomeo Platina Prefect of the Vatican Library, which was meant to be a “photograph” of the foundation of the institution. 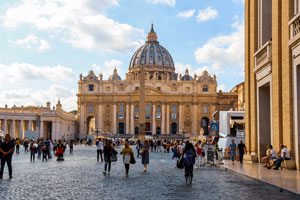 Next the Vatican Gardens, a system of private urban gardens and parks that cover more than half of Vatican City. Tour the gardens and enjoy incredible views of St. Peter’s Basilica. Visit St. Peter’s Basilica, where we will skip the line and view the great monuments of the main church, as well as the amazing ancient necropolis that lies below. Highlights include Michelangelo’s Pietà dei vent’anni, Bernini’s Baldachin,  and the papal tombs by sculptors such as Bernini, Canova, and Algardi.   With special permission from the sacristan, we will view the burial grounds where it is said that St. Peter was taken after his death.

Lunch at the nearby Locanda di Pietro, a restaurant specializing in delicious Roman dishes. This afternoon, pending special permission, we will be  granted access to the incredible Vatican Library, which hosts a phenomenal collection of significant manuscripts. Continue to the Vatican mosaic studio, an active workspace for a team of highly skilled artists whose job it is to restore and preserve the centuries-old mosaics inside St. Peter’s Basilica.

Return to the hotel for an evening at leisure.

Following breakfast, visit the Spanish Royal Academy of Rome, whose library specializes in the history of Spanish art and architecture. Following a tour of the library, see the courtyard that houses Tempietto, a small commemorative temple designed by Donato Bramante, which is considered a masterpiece of Renaissance Italian architecture. Tour the Academy’s art collection, which includes works by painters who were visiting members of the Academy, as well as works loaned by Madrid’s Reina Sofia Museum.

Next on to the American Academy in Rome, one of Italy’s top centers for scholarship and a beloved haven for American scholars studying Ancient Roman and Italian culture and history. Following a guided tour of the campus, enjoy a gourmet buffet lunch in the elegant courtyard. This afternoon, take a walking tour of colorful Trastevere, known for being the most authentic Roman neighborhood, with typical trattorias, artisan shops, and quaint B&Bs. Return to the hotel for an independent evening.

This morning, visit two of the branches of the National Roman Museum. Begin at the Baths of Diocletian to see a few of the inscriptions in their collection. Continue to the nearby Palazzo Massimo to tour their incredible collection of ancient sculpture, which includes masterpieces in bronze such as the so-called Hellenistic Prince and the so-called Boxer. Continue to the Palazzo Altieri, the former home of the Altieri family, who were the princes of Oriolo and the family of Pope Clement X. Tour the interiors of Palazzo Atlieri, which contain major works of art as well as the beautiful library of the Italian Bank Association. Enjoy lunch near Palazzo Altieri. Tour the archives of the Biblioteca dell’Accademia Nazionale dei Lincei e Corsiniana. The Corsiniana was designed in the early 18th century as part of the palace of the Corsini family by architect Ferdinando Fuga. Visit one of the world’s most complete collections of the earliest Italian incunables and highlights of the manuscript collection. This afternoon, tour Villa Farnesina, a Renaissance jewel opened exclusively for The Manuscript Society. The villa is considered one of the most noble and harmonious creations of the Italian Renaissance. Among countless other beautiful works, the Farnesina is home to glowing frescoes by Raphael, who also designed the villa. Return to the hotel and enjoy an independent evening.

Gather this morning for a visit to the Biblioteca Hertziana, a German Art History research center, which is part of the Max Planck Society. The library is housed in the home of great Renaissance artist Federico Zuccari, who  also designed it. Take a private, special-access tour of the Institute archive with the library director. Continue to Villa Ludovisi, the only surviving Baroque-era villa in Rome that is still a private residence. Built as a country retreat for Cardinal Francesco Maria del Monte, the villa contains frescoes by dozens of early Baroque masters including Caravaggio’s only ceiling painting. The Princess of Piombino will graciously host our visit and will open the family’s priceless historical archives. Enjoy lunch at a nearby trattoria, then visit the Museo Nazionale Etrusco di Villa Giulia, which offers the most complete overview of every aspect of the Etruscan civilization in   the world. Tour its extensive collection of art and ancient artifacts, including the incredible collection of Etruscan inscriptions, and walk through the museum’s picturesque garden. Return to the hotel for an evening at leisure.

Visit the Biblioteca Vallicelliana, which houses a collection of about 130,000 volumes. The collection of manuscripts contains about 3,000 Latin, Greek, and Asian manuscripts of great importance for paleographic studies, the history of the church, scientific and literary culture, and a small collection of musical works. Visit the library’s reading room and see highlights from the manuscript collections. The Vallicelliana Library is one of the masterpieces   of European Baroque architecture designed by Francesco Borromini.

Continue to the Palazzo Altemps, another of the locations of the National Roman Museum. Tour its collections of ancient sculpture, which are among the world’s finest and include masterpieces such as the Ludovisi Ares restored by Bernini, and explore its important collection of Republican and Imperial inscriptions. Enjoy an afternoon to explore Rome on your own.

Gather for a farewell dinner at a lovely Roman restaurant within walking distance of the hotel.

Return to the United States